The modern packaging industry relies on a wide range of packaging materials to offer an easy to use to concept to customers. Despite having a vast number of materials at their disposal, many food industry considers tin to be one of the leading material. For instance, the chocolate industry has become a fan of chocolate s.

They understand that using tins for their chocolate warping, they can add colors and bring life to the packaging. Likewise, several other industries are becoming a fan of the tinplate. The limitless possibilities of using it and the endless benefits make it the top priority of every smart business.

In the course of this article, we will be talking about how different brands incorporated tin packaging in order to make a statement.  Of course, we will also shed some light on the background of tin packaging and why it holds this much importance. So, without any further delay, let us get straight to it.

A bit of a History

A bit of a History

The history of metal is perhaps longer than any other material. Human being has been consuming metal for about 11,000 years now. Although, in the beginning, the main objective of metal was to create tools, jewelry, and weapons, but at later things, it becomes part of several things.

Even back then, people sometimes did create small containers to hold significant religious items and precious substances. Since it was very easy to make containers with wood or clay, thus only the affording uses to enjoy the luxury of a metal container.

It was during the industrial revolution that metal become an important material for (chocolate tins) packaging at a large small. The mass production quantity made it easy for metal to gain prominence. With the development, people discovered that some materials were better than others.

For example, Iron was something that you could not use with something moist due to its ability to rust and generating spawn bacteria. It could lead to some life-threatening diseases. For food, Tin was the top priority.

Initially, the British Royal Navy’s food was packed using Tin.  People even started packing other food items to use tins. It was sometime later than the use of stainless steel became common.

Often the stainless steel came in conjunction with a tin coating. Likewise, in the 1950s Aluminum also become an important element for packaging. All these materials tend to offer endless benefits. However, tin seems to be among the top since the beginning.

Even now, metal packaging holds great importance in the food industry especially the tin packaging. Here cans and tin packages hold a lot of wide variety of food items ranging from beef stew to corn. In the food space, something that has the ability to black the aromas and light is imperative.

Similarly, tin offers safety and durability. It also is convenient for many other reasons. Sometimes the beverage industry uses can that is of aluminum mainly because it is extremely malleable and light in weight.

For prepared food and vegetables, the industry is a fan of steel cans as the material offers strength. It can withstand extreme weather conditions. Most consumers believe that can offer standard product experience. It is a well-known paradigm. We tend to get more of our favorite products in tins and cans including all sorts of confections, chocolate s, sweets, dairy products, tobacco, power supplement, coffee and baby formula.

Even though tin is widely popular in the food industry, it is not limited to it. On the contrary, it is diverse in the packaging industry. Tin is the perfect choice for items that require a touch of luxury with durability. The class that tin offers makes it a favorite of many.

There were six different styles pattern available and each one was one of a kind. It seemed that the pattern was drawn by hand. The colorful design spun to life when printed on Tin. After all, tin does have the ability to ensure outstanding colors.

Each crop represents one biscuit flavor. The design of each crop tends to apply to design at a different scale, introduction energy, a refresh pace, and a variety across a range.  To ensure that the plate design gives a slightly worn feel, the company treated it. The packaging now looks something that is being well used and well-loved instead of pristine and crisp.

The cylindrical shape boxes had the brand name embossed on the top in Gold. The cover is also of metal and you will have to rotate it in order to remove it.

When it comes to chocolates, we all have heard about the famous Hershey’s kisses. These are perhaps one of the best chocolates in the world. Hershey's decide to bring back some old memories, by incorporating a beautiful tin box. 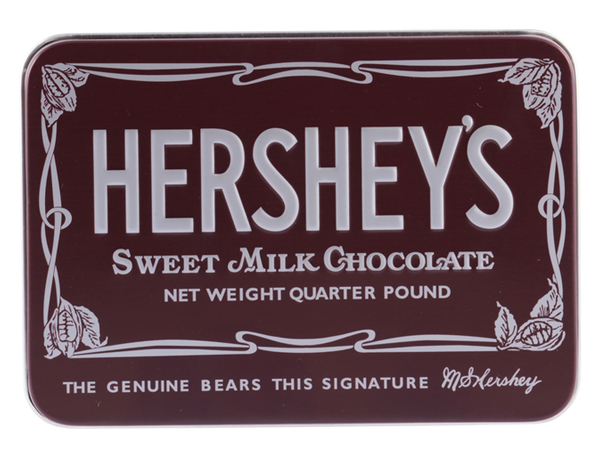 Hershey’s has been selling chocolates for many years now. They wanted to give something more to their best selling. They believed that when an ordinary box of chocolate won’t do, it is time to upgrade yourself to luxurious packaging.

Hershey's introduced a vintage chocolate box filled with Hershey’s kisses. The box tends to give the vibes of the candy wrappers from the early 1900s, right after the company owner, Milton Hershey, launched its first factory.

The brown square box comes in two pieces, the container, and the lid.  The container is of the plain colors, however, the lid does contain information elegantly etched in white color. You will find the name, the logo and other basic details on the lid.

All and all, the beautiful packaging ensures that the box is perhaps and heartwarming gift for a chocolate lover.

Another great example of tin packaging is by The Good Life Company. The packaging speaks luxury and elegance. It reflects the company’s sophisticated and luxurious image. The packaging tends to enhance the overall image of the company.

The box offers a combination of vibrant red with a hint of gold, the typical royal colors. It basically has three-piece box with an outer 5-panel folding. The outer folding is of hardboard. You will enjoy a red sheet with a matt finish on the outer layer.

Once you open the box, you will come across a premium two-piece inner tray. The tray is of hardboard as well. To add a royal touch to the tray, they have incorporated a matt finished Gold sheet.

GLI AFFINATI chocolates are famous not only for their outstanding taste but also for their classic packaging. They are the first chocolate seller of its kind.  You will be able to enjoy a bar of chocolate scented via a natural process.

The packaging offers a sleek and classic design. The company uses slim tin cans to warp the chocolate in a royal manner. The label comes in white colors and it is adorned in gold embossed lettering. This depicts the brands, its locations and the type that it offers.

The chocolate is scented with seven different elements to ensure the production of unique. Yes, the chocolates came in limited editions. The seven major scents include barrique casks, resins, spices, herbs, flowers, tea, and tobacco. 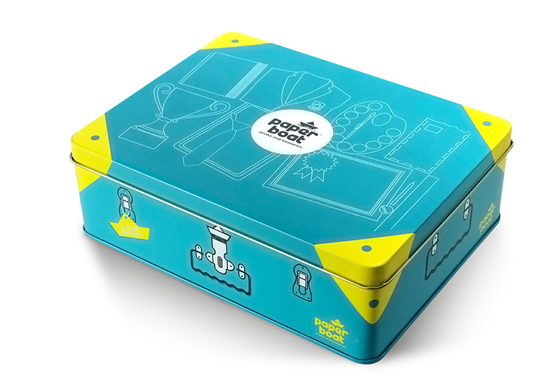 The box is made up to two-piece tin plates and there is lacquering inside of those these piece i.e. the container as well as the lid. The use of a modern technique, offset printing, to print the box. The box has 5 colors, green, white, black, yellow and blue. There are certain areas with UV processing and they are highlighted in gloss.

The packaging is unlike the traditional glossy one. It does not come with traditional designs. It perfectly uses mild colors to bring back beautiful memories. By looking at the box, you will notice how great it looks.